Edgar Colon > About Us

Edgardo E. Colón has his own legal practice in Houston, where his emphasis is in all forms of commercial transactions, corporations, partnerships, commercial lending, real estate and secured (asset based) transactions, mergers and acquisitions, asset purchase agreements, employment matters, contract drafting and negotiation, collections and other related corporate and business matters, public finance, redistricting, commercial litigation and mediation. In addition to his law practice, since 2008, he has been a Visiting Professor of Political Science, Department of Social Sciences, Department of Social Sciences, at the University of Houston-Downtown, where he taught Federal Government, Hispanic Politics, American Legal System, U.S. Civil Liberties, and Introduction to American Constitutional Law.

Prior to starting his own private practice, Mr. Colón was employed as Senior Counsel with Bechtel Corporation, a global engineering-construction organization that provides technical, management and related services to develop, manage, engineer, build and operate installations for customers worldwide. His emphasis was in the negotiation of multi-million dollar engineering, procurement and construction contracts for pipeline and petroleum and chemicals projects in Latin America (particularly Argentina, Brazil, Chile, Colombia, Mexico and Venezuela).

Prior to Bechtel Corporation, Mr. Colón served for 4 years as Assistant General Counsel at Bank United of Texas FSB (later known and Washington Mutual FSB; now known as Chase Bank of Texas, NA), specializing in commercial lending, real estate and secured (asset based) transactions, mortgage warehouse financing, and contract drafting and negotiation. Mr. Colón has substantial exposure to international transactions under NAFTA (involved in developing potential strategies for entry into the Mexican mortgage market and banking industry under NAFTA, requiring substantial knowledge of Chapters 11 and 14 of NAFTA dealing with establishment of financial institutions and protection of investments, and applicable U.S. regulations). Mr. Colón was also involved in other consumer banking issues such as credit card business, withdrawal of deposit issues, retail banking, etc.

Prior to working at Bank United, Mr. Colón worked as an associate with Sheinfeld, Maley & Kay in the Commercial Lending/Real Estate Section with emphasis in commercial lending, real estate and secured (asset based) transactions, general corporate matters, contract drafting and negotiation, and international transactions (preliminary advice to foreign clients with respect to starting or acquiring a business in the U.S.).

Mr. Colón was also with Fulbright & Jaworski for 4 years in the Corporate Section with emphasis in commercial lending and secured (asset based) transactions, asset purchase agreements, mergers and acquisitions, and general corporate matters with some exposure to international transactions. 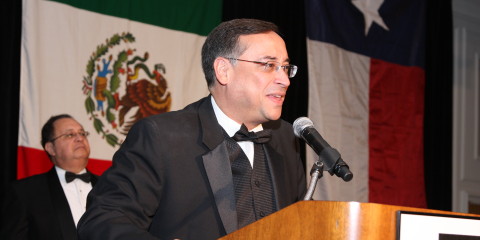 Accomplishments include the publications of Letters of Credit of Business and Bank Failures, 107 Banking L.J. 6 (1990), General Concepts in Letters of Credit Law, 54 Texas B.J. 10 (1991) and Representing the Foreign Investor in an Acquisition, Acquisitions & Divestitures, Chapter 50 (Business Laws, Inc. 1992) (Co-author).

With respect to community activities, Mr. Colón has served on the Board of Directors of the Houston Hispanic Chamber of Commerce since 1993. On that board, he served as Chair-Elect (2004 and 2005), Chairman of the Board (2006 and 2007) and Immediate Past Chairman (2008 and 2009). At the Hispanic Chamber, he was a co-founder and chaired the Chamber’s political action committee. He served on the Board of Directors of the Hispanic Bar Association and served in other capacities such as Vice President (1992), President-Elect (1993), President (1994) and Immediate Past President (1995). He also served as President of the Institute of Hispanic Culture (Houston) in 1995, and as Vice-Chair of the Board of Directors of AVANCE, a social services non-profit organization. In 2008, he was appointed as Chairman of the Board, Harris County Sports and Convention Corporation, by the unanimous vote of the Harris County Commissioners Court. The Harris County Sports and Convention Corporation operates and develops various public facilities at Reliant Park, including the Astrodome and Reliant Stadium. The corporation is a public, not-for-profit corporation overseen by a five-member board of directors appointed by the Harris County (Texas) Commissioners Court.

Here When You Need Us

Sit down with us to discuss you business needs!